Since 2005 the governing bodies of tennis (ATP, WTA and ITF) have been collecting data using Hawk-Eye for many top-level tournaments and the Grand Slams. So what have the governing bodies been doing with this data? Where is it stored? Who owns it? Who has access to it? 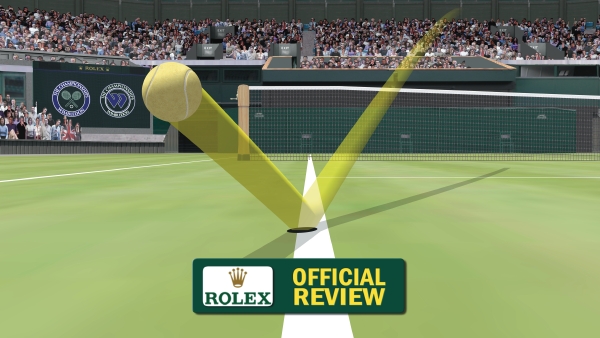 Hawk-Eye was introduced to tennis in 2005. Since then, the governing bodies of tennis have been collecting valuable data about match play. Image: Hawk-Eye Innovations.

Early in 2012 I set out to start mapping tennis matches. As a Cartographer, and tennis player this kind of made sense and excited me! Tennis is a spatial game, meaning that the location of the ball and the players are linked spatially to the court. So at any time during a match we can plot where and when a stroke, or player is. The concept of mapping sports matches is not new. It has been around for some time now and is commonly referred to as Sports Analytics or Spatial Analytics. Many sports like Football (Soccer), Basketball and Baseball have been using analytics for years to explore potential unknown patterns about the game, their players and their opponent’s tactics. We have all seen Moneyball right?

To kick off my research into maps about tennis I manually plotted the ball location and player movement from the London Olympics Men’s tennis final using video footage and a 3D visualization application. The results of the research can be read here. This method of data capture was perfect at the time because it allowed me to captured the tags I needed to run my analysis on. As a result of the research I have had tennis players, coaches and other tech companies contact me wanting help analyzing their players patterns, strengths and weaknesses using similar methods as outlined in my research. Sure, I replied with over-the-top enthusiasm. But, we have to manually capture the data first, and that tends to be time-consuming and a tad laborious. So the client says, “Can’t we use Hawk-Eye?” That’s a great question I tell them, but it’s not that easy…

The search begins for Hawk-Eye data

So how would one go about getting access to this infamous Hawk-Eye data that everyone apparently everyone knows about (like its their brother), has seen on TV, but no one knows where it is or who to contact to get access to it? Go direct to Hawk-Eye?

To cut a long story short: Hawk-Eye state that they don’t own the data they capture. The tournaments do. Or do they? After spending the last 6 month trying to track down the right people in the right place at the right time I receive this response recently from Tennis Properties, the management group who runs the ATP. “Tennis Properties own all of the Hawk-Eye data from the Masters 1000 tournaments. We don’t license this data to 3rd parties”. Well at least that clears up who owns the data. But of course that wasn’t the response I had hoped for!

I then turned to Tennis Australia. I figured they might care to share some Hawk-Eye data with another Aussie. This was their response “The Hawk-Eye data is owned by our commercial/IT teams…. but it is not for use for commercial or external endeavors”. So they own their Hawk-Eye data, not Tennis Properties. Confused yet?

So my search started targeting the ATP 500 series tournaments. Tennis Properties had told me that each of these 500 series tournaments has their own agreements in place with Hawk-Eye and that the ATP does not control the data captured at these tournaments. Sounds promising right? Well it was. The team running the Swiss Indoors tournament in Basel granted me permission to all of their match data for their 2012 tournament. I was ecstatic. Finally I would be able to grow my research, and potentially help some of the pending requests from other interested parties. However, they didn’t have the Hawk-Eye data in-house (sigh). I was then directed to Hawk-Eye themselves to retrieve the data…. 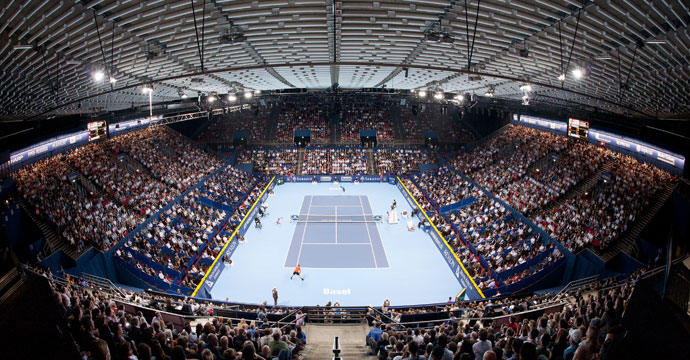 The Swiss Indoors at Basel granted me access to their Hawk-Eye data from their 2012 tournament.  Image: Swiss Indoors.

A further six long months has passed and I am yet to see any sight of the data from Hawk-Eye. Apparently they are too busy to attend to the request of the Swiss Indoors to release the data (grrrggh!).

Why is Hawk-Eye data so protected?

The answer is simple. The data that Hawk-Eye collects is very powerful. It collects the location of the ball and player, the spin of the ball, speed and flight of the ball (just to name a few). If the data lands in the hands of someone who can pull it apart and reveal patterns about players and opponents (that may not have been seen before) then it becomes a potential sticking point for the ATP, WTA or ITF. Or does it? Let’s take a look at this from another point of view.

Bob Kramer, the former tournament director of the Farmer’s Classic* in Los Angeles, said the technology ran at his tournament cost about $60,000-$70,000 for one court, with much of that cost going to installing the infrastructure. Now if I was a tournament director and I was spending that kind of money on new technology then I would be keen to explore ways I can recoup some of those costs. One of those ways may be selling/licensing the Hawk-Data back to its players, the media and fans. Oh but wait, the tournaments can’t do this because the ATP, WTA and ITF control the data. Or do they?

So who really owns Hawk-Eye data?

The tournaments seem to be funding the implementation of the technology (the richer tournaments like Indian Wells have more Hawk-Eye courts than say Miami) so is it their data to share and/or commercialize? Or is the data in fact the player’s data? They are the ones putting on the show; the data is about them, not the tournament. What if Roger Federer or Serena Williams wanted access to the Hawk-Eye data? How quickly would the ATP, the tournaments and Hawk-Eye react to their request? Are they permitted to even access the data?

Tennis unlike Basketball, Baseball and Football (Soccer) is an individual sport, played mostly on neutral territory (with the exception of Davis Cup). In team sports, it is the teams who are collecting the data at their home games, not the governing bodies of each sport. So where does this leave the players? Does Novak Djokovic have to bring his own data capture equipment on court to trace him movements and map his shots? Let’s hope not! 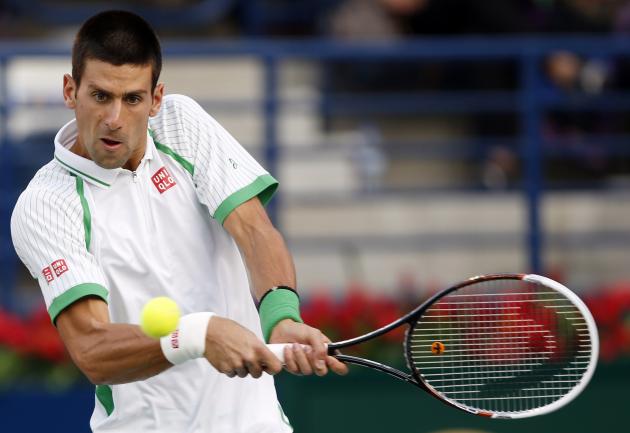 World number 1, Novak Djokovic may have to bring his own data capture equipment to matches to record his shot patterns and movements! Image: Reuters

What’s in it for the ATP, WTA and ITF to unlock (open) Hawk-Eye data?

Open data initiatives have been actively gaining momentum (outside of sport) as governments and private industry see the benefit of making their data freely available. Late last year however, the Manchester City Football Club (MCFC) opened up some of its match data so it could crowd source new ways of visualizing the data and encourage innovative ways of making use of it (read the Forbes article about the MCFC program here). They were essentially tapping into the crowd’s knowledge and passion for the game to better understand their players and opposing teams. If the governing bodies of tennis were to do this it would open up a unique opportunity to engage with the fans and media like never before. Tim Davies whom is an open data advocate calls this making use of “social infrastructure” that surrounds sports.  Opening up the vast of amounts of tennis match data available at a relatively low cost (or for free), would lead to third party innovation, where the next generation of tennis fans could design innovative products, which may result in a new wave of interest in tennis analytics and spawn many new products in tennis. Imagine what IBM could do with data, or anyone else that has an interest in commenting and reporting on the game? Imagine the maps and graphics that the tournaments could supply to the pressroom at the end of the day to help report on the days play!

Opening data can be scary (but it’s time to be brave!)

Opening up your data to the whole world can seem scary at first. There is no doubt the ATP, WTA and ITF will have reservations about doing so. But think of the increased two-way interaction, between the innovators and the data suppliers. Perhaps Hawk-Eye data can be extended way beyond what it is currently being used for? Perhaps there is a revenue stream back to the tournaments that may offset their cost of installing the technology. The data may even be turned into physical products, like artwork for Nike’s next Rafael Nadal t-shirt! Who knows? History has shown that opening up data is not in fact scary, it is incredibly exciting and the possibilities appear endless. 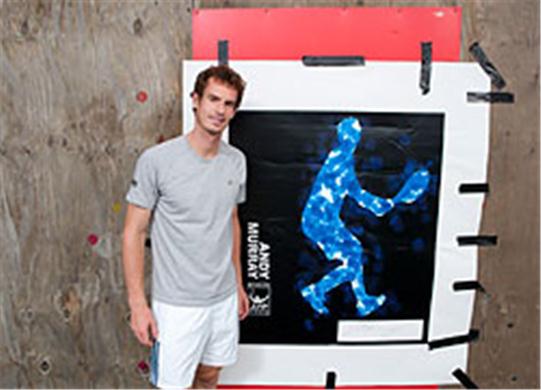 Andy Murray poses in front of ‘tennis art’ at the O2 Arena in London last year. Andy created the unique portrait of himself that was auctioned off for charity late last year.

Unlocking Hawk-Eye data is a natural evolution for tennis. As pressure builds on the ATP, WTA and ITF to-be-seen-to-be-keeping up with other sports, perhaps the locks will come off the data. At present, only the TV broadcasters and national tennis associations appear to have a key to the data. Sadly, there is a very valuable stockpile of data gathering dust on some internal server at Hawk-Eye with no use for it all! Of course you might get lucky and be granted access to a portion of that data but fail to ever see it! It will only take one of the ‘next gen’ of players, like a Sloan Stevens or Milos Raonic who understand what modern analytics can do for their game, or one commentator (hint hint, Justin Gimelstob) to lean hard on the governing bodies to move this issue in the right direction. Imagine how powerful the ATP FedEx Reliability Stats could be if they integrated space into their stats by using Hawk-Eye data! Let’s hope that happens quickly. Then we can sit back and watch it open up a whole new world of tennis analytics, third party products and applications that will benefit the players, tournaments, the fans, the media and most of all the great game of tennis itself!

* The Farmers Classic will not be returning to the ATP circuit in 2013. After 86 years, and being the longest running annual professional sporting event in Los Angeles, it ran its last event in 2012.